[Editor’s note: To celebrate the opening of Paula Vogel’s Indecent on Broadway this April, the Digital Yiddish Theatre Project asked some of the creative minds behind this production to share some insights into their creative process. For this post, we asked Lisa Gutkin to share how she went about scoring Indecent. Here, she details the living and breathing aspect of music composition, what it means to strike the right tone, and how melodies appear, disappear, and reappear, all while trying to develop her own theatrical musical approach to dovetail with playwright Paula Vogel’s and director Rebecca Taichman’s dramatic vision.]

Sometimes melodies pop out, and I have no idea where they come from or what caused me to write them at that moment. And sometimes I craft a melody over time, piecing together different sections, rewriting, etc. The “Rifkele and Manke Theme,” one of the main themes in Indecent, was simultaneously spontaneous and carefully crafted, and came about through a beautifully collaborative process. Several things were happening. One was that we were deeply connecting with the characters in the play. Director Rebecca Taichman’s style of working was that we were all in the rehearsal room at almost all times. So as the actors got to know their characters, and as playwright Paula Vogel changed the script to deepen our understanding of them, and choreographer David Dorfman found movements that resonated with them, we, the composers, could feel the desires, oppressions, and fears of the characters, and we became emotionally attached to them.

At the same time, my co-composer Aaron Halva and I charted out what was needed - what scenes tied into each other, and could benefit from the same theme, what the themes needed to say about what was going on, and how they might want to be varied to emphasize a change in time or intensity. We did not make a conscious decision about who would write what, or in what style, but we went home each night and wrote melodies that could fill these needs. During rehearsals, melodies would be tried, rejected, moved, or edited, and even to this day, as we approach the Broadway opening in mid-April, 2017, we are pulling out melodies that were tabled back then, but seem appropriate now that scenes have morphed.

I began to feel that for Paula, the relationship between the two lovers in both the inner play — God of Vengeance — and our outer play, represented not only universal love, but freedom, and decided first that the melody needed to be part sad (because of how hard it is in the play and life to achieve freedom) and part triumphant, and have a sense of longing that ran through all parts.

Keeping in mind what these two girls feel for each other, and what music they might have been surrounded with at the time their story was written, I thumbed through melodies in my mind — my own compositions and traditional ones. When a melody would remain in my mind, I made note of what aspects of it felt connected to what we needed for the piece. What emotion drew me to think of that piece? Then I studied the rhythm, the tempo, and the shape of the melody. My mind kept coming back to a Zhok, and I realized that that rhythm felt like a heartbeat. And it is a rhythm that has lots of space for embellishment, and could be transformed into a waltz, or a gigue, or other forms outside of the Jewish and Eastern European traditions, which would lend the universality that I was looking for.

Once that came into my mind, all other ideas were obliterated, and I walked around obsessively for several days feeling the rhythm that was the beauty of Rifkele and Manke. Yet still, I had no melody. So I played an older melody of mine (that has now become “Der mames shpigl” (My Mother’s Mirror) on the Klezmatics’ new cd Apikorsim) for Rebecca and Aaron, and we all thought it would make a beautiful theme. It had the longing and triumphant sections, it was in the Zhok rhythm, and we used it for a few days. But in trying to pull it through different scenes, something was not quite right. First of all, it did not lend itself to a particular Bach-like variation that was forming in the back of my mind. And there was something else that I can only identify in retrospect: the sad and triumphant sections were too different from each other. The change in mood within the piece was too obvious. I was looking for something less noticeable and hence more malleable.

Yet there was something about the first three chords of it that would not leave my mind, and for a few days I only knew that an A minor arpeggio was going to open the melody. I played variations of A minor on the violin, on the piano, and nothing was coming up. I carried my computer/keyboard set up from living room to kitchen, and then set up in bed. And then one morning I literally woke up with the melody - fully formed - wrote it out in 10 minutes, and that was it! Different parts of the melody worked in different scenes, the variations strengthened, and the best part was that it intertwines beautifully with melodies that Aaron wrote, so we could move from one to another seamlessly, which is in keeping with Rebecca’s direction. 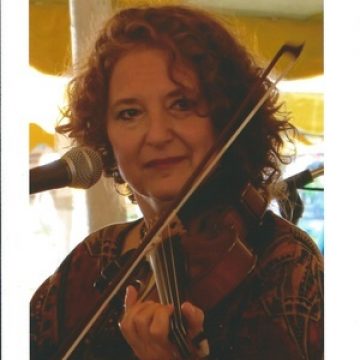 ​Grammy-winning songwriter Lisa Gutkin is best known as violinist and vocalist for the Klezmatics.