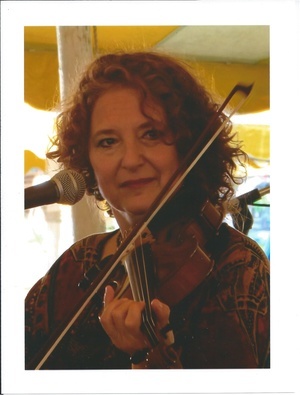 Grammy-winning songwriter Lisa Gutkin is best known as violinist and vocalist for the Klezmatics, for her appearance in Sex and the City, for her work with Sting in his Broadway production “The Last Ship,” and most recently as co-composer and on stage musician for Paula Vogel’s award winning play INDECENT, which heads to Broadway in Spring 2017. A masterful musician and creative force in the Klezmatics for more than a decade, Lisa’s technique and emotionalism have resided at the core of the band’s sound. But fans who have only witnessed her within the context of the Klezmatics have experienced just a fragment of what this multi-faceted artist is capable of producing. On her recent EP release, “From Here On In,” produced by John Lissauer, Lisa sings her original Americana songs, backed by her fiddle and tenor guitar and a host of wonderful musicians.

Lisa Gutkin details the living and breathing aspect of music composition, what it means to strike the right tone, and how melodies appear, disappear, and reappear.