[Editor’s note: Indecent reimagines the story of Sholem Asch’s classic Yiddish drama Got fun nekome [God of Vengeance], from when the young playwright first shared the work in Yiddish writer I. L. Peretz’s Warsaw apartment, to about a half-century later, in the twilight of Asch’s life. In between, Paula Vogel introduces us to episodes—some historically based, others invented—that allow her to use the journeys taken by the play and its creator to explore broader questions of the art of theatre, the fate of Yiddish culture, and the marginalization of persecuted minorities, whether by virtue of their religion or their sexuality.

The action in Indecent is formed by a troupe whose members take on multiple roles over the course of the play. Throughout the play, text (presented on title slides, comparable to those seen in silent movies) is protected on the back wall of the theatre, indicating locations, characters, the language the characters are speaking at any given moment, and other key information.]

For a while, I had wanted to wend in the stone metaphor from the first scene in which [I.L.] Peretz turns to the young Sholem Asch in the study and tells him: This play (God of Vengeance) is a stone. If you must throw stones, throw them outside the tent.

And so when Lemml decides to leave America after the verdict in the obscenity trial, People v. God of Vengeance, we had the following scene:

(I cut the scene after a few drafts. It did not move us forward towards the end of the play. But I am very fond of the visual motive of stones in the suitcase.)

(The troupe becomes a well-fed American audience in the Catskills. We would never know there’s a war going on thousands of miles away. Two women sing. As our song birds warble, Lemml continues his trek. It’s a long, heavy, slow journey. His arms ache from the larger suitcase. He can barely lift it. He drags it part way. Puzzled, he opens the suitcase. It is filled with stones. He dumps out a small pole of stones onto the stage. Closes the suitcase. It’s much lighter. He continues on his way.)

Of all the boys I’ve known and I’ve known some
Until I first met you I was lonesome
And when you came in sight, dear, my heart grew light
And this old world seemed new to me.
You’re really sweet I have to admit you
Deserve expressions that really fit you
And so I’ve racked my brain, hoping to explain
All the things that you do to me.


(The Bagelman sisters continue to sing. Another part of the stage:)

TITLE: Selected Words of Sholem Asch
THE GOD OF VENGEANCE
MOTKE THE THIEF
UNCLE MOSES
KIDUSH HA-SHEM
THE WITCH OF CASTILE
THE MOTHER
KAYN AMERIKE
THREE CITIES
THE SAYER OF PSALMS
SONG OF THE VALLEY
THE NAZARENE
MARY
THE APOSTLE
TITLE: Sholem and Magda Asch walk on the beach in Florida
1943

(The eminent man of world literature walks, savoring every breath of salt. Magda walks too, but her anxious eyes are on her husband. The pause a moment. Sholem inhales deeply. The following is spoken in Yiddish; here in translation.)

You’re right. This is what I needed. To get away with you.

Some perspective. (They continue to walk. A man passes them in the other directions. He stops.)

Hey. Hey-you’re Sholem Asch, right? The writer? (He may be coming up to them for an autograph.)

Excuse me…I am enjoying the day. I hope you do, too. (The Asches continue; the man stops them again.)

Answer my question: are you Sholem Asch?

Don’t talk to him. Keep walking.

Hey! It’s the Jew-hater, Sholem Asch! The man who sucks up to Christians?! Gracing us with his presence, walking among the Jews of Florida– (Asch grips Magda’s elbow.)

Just walk on the beach back to our hotel–

(The man shouts a torrent of hateful Yiddish expletives that will not be translated. He comes upon the piles of stones left on stage. He picks up one and hurls it. He misses. Asch tries to shield his wife as best he can. The man stands defiant.)

FOR THE LOVE OF GOD! I am walking with my wife! (Magda eludes Sholem’s grasp and confronts the Man.)

You! You call yourself a Jew? Throwing stones at another Jew! And you accuse my husband of being an Apostate? Oh, you don’t know what that word means? You only speak Yiddish of the gutter! Of the streets! Take one more step towards my husband and I will take this stone and wash your mouth out with it! You don’t deserve to occupy the same space!

(The Man leaves. Magda turns to her distraught husband; they hurry away together.) 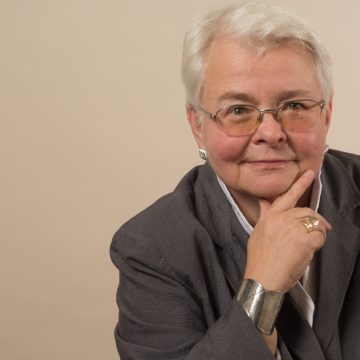