Jevel (Khevl) Katz was the star of the Yiddish stage in 1930s Buenos Aires. Born in Vilna in 1902, he immigrated to Argentina in 1930 and gained enormous popularity soon after his arrival in the country. Katz died in 1940, at the height of his artistic career. Drawing upon Jewish and Latin American music motifs, he parodied songs by borrowing and Yiddishizing Spanish and Argentine vernacular words, echoing the daily language of Jewish immigrants. By the mid-twentieth century, his posthumous fame waned as Argentine Jews integrated and spoke less Yiddish. There has been a resurgence of scholarly curiosity about this singer and songwriter since the beginning of the millennium. Alejandro Vagnenkos’ documentary Jevel Katz y sus paisanos (Jevel Katz and His Fellows, Argentina, 2005) is one of its earliest manifestations, but the film has, to date, garnered little discussion in English. In addition to Buenos Aires, the documentary was screened at film festivals in Punta del Este (Uruguay), São Paulo (Brazil), Barcelona (Spain), Trieste (Italy), and Warsaw (Poland).

The film recovers the testimonies of ten people who saw Katz perform. These oral histories are intertwined with interviews conducted with three scholars (Noé Jitrik, Ester Szwarc, and Eliahu Toker) who provide cultural and historical context. Visual and audio archival materials—including the singer’s recordings—contribute to reimagining the epoch. By relying on Katz’s “fellows’ ” recollections, the film does not simply attempt to reconstruct the artist’s trajectory and reenact his poetic world, it also delves into exploring the articulation of memory—how it interprets, shapes, and recreates the past. As it pictures the past through the particular and the individual, the documentary’s historiography establishes a dynamic relationship between memory and history, recovering the singer’s cultural significance and restoring his place in Jewish Argentine collective memory. Fifteen years after the film’s production, the filmmaker reflects retrospectively on his motives for making the movie, and how Jevel Katz has regained recognition since then.

Vagnenkos is associate professor of communications at the Universidad Nacional de Hurlingham (UNAHUR), located in metropolitan Buenos Aires. Among his other productions is Escuela trashumante (2015), a documentary on an educational project for a Mapuche community.

Patricia G. Nuriel: What led you to make a film about Jevel Katz?

Alejandro Vagnenkos: The trigger was a newspaper article. A member of our team made me aware of a newspaper article and told me: “This is a topic for a movie.” This article by Isidoro Gilbert on Jevel Katz was published in Revista Ñ—the culture magazine of Clarín. I had no idea who Jevel Katz was. I had never heard of him, not even within my family. When I learned that thousands of people attended his funeral here in Buenos Aires, I realized that this was a story worth telling. It is a moving narrative that also touched me because it relates to my personal life. This is how the idea of making this film started.

PN: In what ways did Katz’s story touch you?

AV: I felt Jevel Katz’s story deep in my core, which is not only my Jewish identity: it goes back to my childhood, the sounds of my childhood. Those childhood sounds are of the Yiddish language, of my bubbe Raquel, my zayde Adolfo, and my bubbe Janet, who, fleeing from war and persecution, landed in a distant country like Argentina and in a neighborhood like Once. I still use Yiddish in my family. There are certain words that characterize situations for which I cannot find a substitute in Spanish; in one word, one could say a whole sentence. Interviewing people for the documentary was like paying homage to the conversations I had with my grandparents. I felt that I was recovering some of those childhood sounds and images, of which I have happy memories. I wish I had the chance to talk with my bubbe Raquel about Jevel Katz; I am sure she knew who he was. My grandparents died before I started making the movie.

PN: Besides the tens of thousands of people who attended Jevel Katz’s funeral in 1940, what aspects of his work and life did you find most captivating?

AV: Jevel Katz’s lyrics were what struck me the most. I find the mixture of Yiddish and lunfardo (Buenos Aires slang) interesting. It is fascinating that an immigrant who arrives in Argentina, who gets nurtured by the Buenos Aires popular culture, is then able to mix it with Yiddish. It is also interesting what he was able to achieve in terms of cultural integration. He not only performed in Buenos Aires but also toured in the agricultural Jewish colonies in Entre Ríos and Santa Fe, as well as cities like Tucumán. Jewish immigrants were all constructing a new identity: being Jewish in Argentina. Immigration in a broad sense was the underlying theme that drove my interest to make the film: how mobility from any territory to another happens; how people escape from one place and settle somewhere else; how the cultural components progressively integrate into one another. Noé Jitrik elaborates on this idea; he represents my voice in the film.

PN: In the documentary, you interview some elderly fans of Jevel Katz—his “paisanos”—who, like him, were also immigrants to Argentina. They share their memories of this singer and their experience as Jewish immigrants. The film grants them a voice to speak about their lives in a way that means they also become the film’s protagonists.

AV: My intention was to work with Carlo Ginzburg’s and Giovanni Levi’s concept of microhistory. My wife, Gisela Andrade, who is a historian, also contributed to this idea. With this notion in mind, the plan was to reconstuct an epoch relying upon the interviewees’ oral stories. My aesthetic choice was to tell the story of Jevel Katz beginning with the testimonies of those who remembered him. Also, through the interviews, I somewhat recovered my childhood conversations and memories. Moreover, we had very little information on Katz at that time. One can search “Jevel Katz” on the internet today and get many results, but there was absolutely no information when we made the movie in the early 2000s. We were able to do some period reconstructions of the 1930s, such as the theatres and cinemas where Jevel Katz performed; however, we needed to draw upon the information provided by those who saw him in life.

PN: How was the film received when it premiered in 2005?

AV: The film was very well received, and we were surprised by its impact. The first screening was at BAFICI (Buenos Aires Festival Internacional de Cine Independiente). We were very proud when it was accepted by the festival because it is not easy to be programmed by such a prestigious festival as BAFICI. Tickets were sold out days in advance; people even argued at the box office. We needed, therefore, to have twelve additional screenings at Sala Leopoldo Lugones and Centro Cultural Ricardo Rojas. We were very surprised and still are because we know that each documentary has its own audience, its own niche. What we didn’t know was that that niche was so large.

PN: The film shows an archival picture of Jevel Katz performing in blackface. The performer represents a misappropriation, which is indicative of values that are unacceptable and disparage another culture.

The DYTP supports Patricia Nuriel’s statement and strongly condemns racism and the use of racialized stereotypes.

PN: In retrospect, what reflections can you make?

AV: It is wonderful that the Jevel Katz phenomenon is being studied, but I don’t believe his story has been fully explored yet. Researching Katz is examining a period in history; it is studying Jewish immigration in Argentina—a country that has wonderfully absorbed its immigrants. Katz is also a topic that allows us to think about the present: migratory influxes not only in Argentina but all over the world. Immigration is a current topic, especially when disturbing events happen. However, the potential of immigration and the cultural benefit of it unfortunately don’t receive the attention they deserve.

PN: What project are you working on, and what are you planning for the future?

AV: I am working on a project related to love stories of couples who are in their fifth decade of their relationship. For the future, I am planning on creating a movie concerning a teacher who disappeared during the 1976–1983 dictatorship. Each story, each film, has its own time and usually is related to vital moments of one’s life and the spaces through which one moves. Filmmaking processes give rise to topics that are pending in one’s life and that one has been working on. It was not a coincidence that I produced Escuela trashumante on the theme of education—a field with which I became involved as I was working on audiovisual materials for schools. Neither was it a coincidence that I made Jevel Katz, a film with immigrants. This is how it usually happens: When a topic comes up and one realizes that it strikes at one’s personal core, one goes for it and produces something artistic—in my case, audiovisual language.

The interview was conducted in Spanish and translated by the author into English. 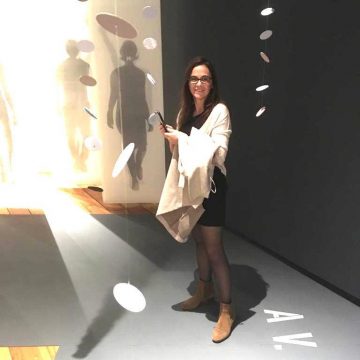 Patricia G. Nuriel is associate professor of Spanish in the Department of Modern Languages, Literatures, and Cultures at Wofford College.