My first real-life encounter with Fyvush Finkel coincided roughly with my entry into the world of New York Yiddish theatre. I was working as a development associate at the newly reorganized Folksbiene Yiddish Theatre (now known as the National Yiddish Theatre Folksbiene.)

My task was to call Fyvush and see if he would appear at an event for the theatre. I don’t remember much about the conversation (or the event) except that I was sweating a lot and Fyvush was, despite my nervousness calling a genuine celebrity, happy to be of assistance. It helped that my boss, Zalmen Mlotek, was the new artistic director of the theatre, and he had (and has) formidable name recognition in the Jewish showbiz world. That was 1998.

The last time I chatted with Fyvush was March 2016, when he performed two sold-out cabaret nights at the Metropolitan Room. The show was divided into two sets, the first featuring his two sons on piano and xylophone with a small, but impressive, band. Other stars might have stayed in the dressing room or hung back until it was time to go on. Not Fyvush. You could tell he was thrilled to be working, thrilled to be in the spotlight, thrilled to be sitting with his fans, even as his physical condition was clearly not good.

Somehow I ended up seated next to Fyvush himself, the two of us at one end of a long table, the other end of which jutted right up against the stage. (Have I mentioned that the Metropolitan Room is more over-stuffed closet than room?) Sitting next to Fyvush himself was both a happy surprise and a slightly anxious proposition. Small talk is not my forte. And if I found it nerve-wracking to talk to Fyvush on the phone as an awkward 23 year-old, it was just as awkward in person at 40. Luckily for me, a stream of well-wishers were inching their way between table, chair, and banquette, all eager to tell Fyvush how much they loved him, how they had seen his last show, how they had an eligible widow they wanted to set him up with.

Even better than the receiving line, though, was the show itself. Finkel’s two sons, Ian and Elliot, are top-notch New York freelance musicians. Both have worked with their father for decades, and it was clear their partnership was something much more than familial, more than collegial. Without a doubt, Fyvush knew his band’s repertoire, as well as his sons’ musical language, like the back of his hand. Yet their every dazzling solo, every clever turn of phrasing, was met by a nod or cheer from Fyvush. Seeing the show with Fyvush was like listening to jazz with my musician friends, appreciation on an insider’s level, a peek behind the curtain that divides audience and performer.

The first act was purely musical, a chance for the band to show off their considerable chops and warm up the crowd. The second act was Fyvush doing material familiar to anyone who has seen him live or heard his CDs: Yiddish vaudeville chestnuts, selections from Fiddler, and sprinkled throughout, jokes even older than he was—and, may his memory be for a blessing, Fyvush was really old. If it had been anyone else attempting that kind of repertoire I probably would’ve walked before the waitress could hit me for the first of the two-drink minimum. What elevated Fyvush’s act far above moldy nostalgia, of course, was Fyvush.

There’s a reason Fyvush became a star (no matter how belatedly.) If an elderly Jewish man, with the kind of face that would be at home on the Yiddish ten-dollar bill, can be said to have that elusive “it” of charisma, he had it. He could even put over a devastating version of “You Don’t Send Me Flowers” and have you buy it 100%. Fyvush was at home in every corner of showbiz, and when you saw him perform you understood he had earned that confidence. When Fyvush did a Menashe Skulnik bit, he did it as a performer who actually came up in the Yiddish theatres of Brownsville and points beyond, and no doubt had learned the material firsthand.

When Fyvush passed, my social media timeline was full of my actor and musician friends posting pictures and reminiscences of working with Fyvush. I can’t say I wasn’t jealous. I never got to collaborate with Fyvush in the way that so many of my friends have. I don’t act, sing, play an instrument or perform in any way. My place in the theatre, insofar as it exists, is firmly backstage, far away from the “talent.”

Even so, I have managed to spend a considerable amount of time in the world of Yiddish theatre over the years, mostly as an operator of supertitles and, finally in the last couple years, writing my own bilingual Yiddish-English play. In the process, I worked with, and became close to, some of the most important Yiddish theatre artists working today.

But after leaving the Folksbiene, my only contact with Fyvush was as a fan, seeing his various cabaret shows, buying his CDs and, quite memorably, attending the reading he and Theo Bikel did in 2007 of Neil Simon’s Sunshine Boys in Yiddish. The protagonists of The Sunshine Boys are two old vaudeville partners, now seen (at best) as quaint relics of a bygone age with no place in contemporary entertainment. Fyvush, however, continued to work, often with much younger artists. But the temptation to conflate Fyvush the character with Fyvush the working artist is understandably strong.

It’s easy to portray Fyvush as the avatar of an entire tradition and thus to read his death as the death of the institution of Yiddish theatre. Take, for example, an appreciation published in Tablet. Rachel Shukert calls Fyvush “a kind of last living link to the lost world of the Yiddish theatre…” This attitude toward Yiddish theatre, as a “lost world,” is hardly an uncommon one, reinforced everywhere from pop journalism to the more rarified space of the museum exhibit.

The Museum of City of New York recently mounted an exhibit called New York’s Yiddish Theater: From The Bowery to Broadway. While crammed full of truly amazing memorabilia and snippets of historical narrative, Yiddish theatre as presented in the MCNY exhibit was a thing under glass, with no present or future, and instead of reflecting on the peaks (and challenges) of current New York Yiddish theatre, the exhibit was padded out with material only marginally related to Yiddish language theatre (Barbra! Fanny Brice!)

Yiddish theatre isn’t dead, but that doesn’t stop folks from publishing its obituary with alarming regularity. As Rachel Shukert wrote, “Fyvush Finkel, by nature of his extraordinary career and more extraordinary longevity, was the bridge to all this, unseen by most of us, now gone the way of the spirits. It’s a role he embodied literally in what has always been my favorite of his performances, the prologue to the Coen Brothers paean to suburban Midwestern Jewish alienation (a subject near and dear to my heart, as you might imagine), A Serious Man. As a ghost, visiting a home from beyond the grave, Finkel was a literal messenger from the other side, a reminder of what has been left behind. His memory will be a blessing, but it will also, most importantly, be a memory.”

It’s a beautiful, haunting image; who doesn’t love a good ghost? But Fyvush didn’t perform the prologue scene alone. Right there with him were husband-and-wife Yiddish theatre impresarios, Yelena Shmulenson and Allen Lewis Rickman. Yelena and Allen have been, individually and together, working in Yiddish theatre for decades, creating some of the most exciting, compelling and historically grounded Jewish theatre out there.

What would happen if we choose to see Fyvush not as a ghost, but as a link in what Yiddish literature calls di goldene keyt (the golden chain)? How would that change our perception of those who are gone? How might that change our responsibilities to those who build and create within the institution that turned Philip into Fyvush? I’m not sure, but if we are to remember Fyvush, I hope we will also remember to ask the questions vital to the future of what he loved so much. 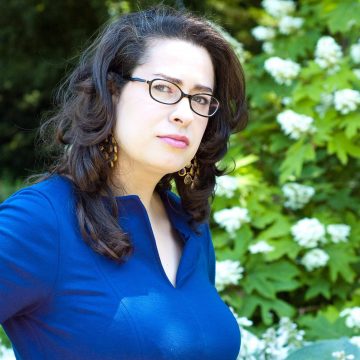 Rokhl Kafrissen is the author of A Brokhe/A Blessing, a three act, Yiddish-English gangster ghost romance for the twenty first century. She blogs about Jewish life and culture at Rokhl.blogspot.com