A Yiddish Homecoming for Fiddler on the Roof

Fifteen years ago, I played violin in the pit orchestra for a high school production of Fiddler on the Roof in Sheldon, Iowa, a town whose five thousand residents were overwhelmingly white, Christian, and politically conservative. As the only Jew in at least a fifty-mile radius, I wondered how the show would resonate with the audience, most of whom had probably never seen an observant Jew in person. To what degree could a town that enjoyed demographic majority status possibly empathize with the Jewishness that Fiddler portrays?

Last week, I watched Tevye (Steven Skybell) lug his dairy cart on stage and begin his opening monologue under very different circumstances. For one thing, this Off-Broadway production, directed by Joel Grey, is Fidler afn dakh—Shraga Friedman’s Yiddish translation of the Broadway original. The Folksbiene’s production marks the U.S. premiere of the Yiddish version, which was last performed in Israel in 1965. And another thing: I was seated elbow to elbow in an auditorium full of Jews, this time as a member of the demographic majority (in Edmond J. Safra Hall, anyway). Again I wondered what it meant to experience this show here and now. What value, what relevance, does a Yiddish version of a Broadway reimagination of Sholem Aleichem’s stories about a humble dairyman add to the show’s already formidable legacy?

Fiddler’s relevance has, of course, remained a pertinent question throughout its performance history and its scholarship. The show has merited considerable discussion for the extent to which it sanitized, redacted, or otherwise revised the most salient aspects of Sholem Aleichem’s stories. One of the most significant departures from Sholem Aleichem’s stories is that on Broadway, Tevye and his family travel to America instead of Palestine. This shift transforms Tevye from Jewish Every-Man to Jewish Every-American, the mythical link between modern American Jewry and the East European shtetlekh (towns) from whence they came. It is no wonder that Fiddler frequently serves as the point of entry to American Jewish culture, especially for non-Jews.

As Alisa Solomon notes, Joseph Stein, Jeremy Bock, and Sheldon Harnick exchanged the Jewish particulars in order to emphasize the universality of the show’s themes, retaining only the most essential Yiddishisms in the script, and avoiding so-called “Second Avenue schmaltz.” By all accounts they succeeded: Fiddler has been performed in virtually every language, in every corner of the world, by casts of varying levels of theatrical experience, from modest high school auditoriums in places like Sheldon, Iowa to the 1,330-seat Nissay Theatre in Tokyo, Japan.

Fidler afn dakh returns Tevye, his family, and his fellow denizens of Anatevke to their imaginary Yiddish roots. Friedman’s translation is mostly faithful to the Broadway original, albeit with more frequent nods to Sholem Aleichem. “If I Were a Rich Man” transforms, for instance, into “Ven Ikh Bin a Rotshild [If I Were a Rothschild],” which is almost, but not quite, the title of Sholem Aleichem’s story “Ven Ikh Bin Rotshild”; the argument during “Traditsye [Tradition],” originally about a horse and mule, becomes a dispute over a she-goat versus a he-goat, echoing the plot of another Sholem Aleichem story. By all accounts, as cast members and reviewers have noted, something about hearing the show in Yiddish feels authentic—even if that authenticity is admittedly engineered.

But Fidler is much more than the novelty of hearing Yiddish dialogue flowing freely from the mouths of a cast who learned the language and inflection in less than a month’s worth of rehearsals. The larger ensemble numbers are energetic and wonderfully choreographed by Staś Kmieć. The dream sequence, in which Tevye concocts a vision to convince Golde that Tsaytl should marry Motl the tailor instead of Leyzer-Volf, is particularly delightful in this regard. Altogether, the number reads as realistically surreal, more comedic than spooky. Frume-Sore for instance, in all her glory from beyond the grave, is clearly played by two people (Anonymous as the legs, and Jodi Snyder as the head and arms), capturing the wholly manufactured nature of Tevye’s nightmare. Her screeching admonition to nullify the engagement between her husband and Tsaytl, or else, is the raucous cherry atop this heartfelt production.

Beowulf Borrit’s minimalist set design makes efficient use of the small stage and lends a modern quality to the production. The word “Toyre [Torah],” here the stand-in for Tradition, is written in Hebrew characters on a piece of cloth that hangs at the back of the stage. It is the focal point of the set—so much so that when one of the Cossacks tears it down during Motl and Tsaytl’s wedding, the audience gasped audibly, their surprise and distress palpable. The pastoral imagery that might reinforce Anatevke’s backwater status in the Russian empire is wholly absent, rendering the beloved shtetl a kind of Everyshtetl: Anatevke could be located anywhere. Further, if reviews like this one are any indication, a sizeable portion of Fidler’s audience members interact with the current production, to varying degrees, through the lens of their own experience. For some of us, this simply means positioning the current production vis-à-vis other productions we’ve encountered. For others, it means revisiting personal stories of political trauma and communal upheaval. This production, then, allows itself to be as much about Anatevke as it is about all of the intimate expectations and experiences that the audience brings with them to the performance.

The current political climate in the US, as well as the ongoing global refugee crisis, only heightens Fidler’s resonance. The overtones of tension between the dispassionate Russian soldiers and the amicable Jews at the inn during “Lekhayim” escaped me during the performance, but watching the Constable overseeing the “demonstration,” complicit in the violence against the Jews of Anatevke, did not: I could not help but think of the riots in Charlottesville nearly a year ago, among other horrifying recent events. The ending was similarly chilling: as the Jews of Anatevke pack their belongings and disperse, a microcosm of countless other diasporas, the lighting design becomes cold and bleak. The Jewish spark, the communal warmth, has been momentarily extinguished: Tevye and his neighbors will have to rekindle dos pintele yid somewhere else.

In the end, this particular Fiddler—in Yiddish, in America—feels personal. Unlike in Sheldon, Iowa, the show’s inherent Jewishness speaks directly to the audience: words like lekhayim are common instead of kitschy, requiring no explanation to be immediately understood. That Yiddish is the language of this production heightens the poignancy of hearing Motl and Tsaytl say that they will go to Warsaw, invoking hundreds of thousands of native Yiddish speakers who perished during the Shoah. Perhaps too, there is the question of my own culpability towards other marginalized groups, particularly since Tevye’s journey to America echoes the story of my own forefathers (my Zayde’s father fled the Pale of Settlement before World War I and settled in rural North Dakota, a place almost, but not entirely, unlike Anatevke). And then there is the production’s proximity to the Statue of Liberty and Ellis Island, where Tevye would have landed had he really come to America. With these testaments to hope and refuge visible from the Museum of Jewish Heritage, watching Fidler felt like standing face to face with Tevye, the mythical Jewish Everyman, and welcoming him home.

You can read more from the DYTP about Fiddler in Yiddish here, here, and here. 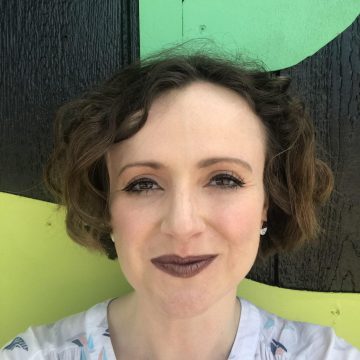 ​Devora Geller is Head of Quality Assurance and Digital Preservation for the Edward Blank Vilna Collections Project at YIVO.