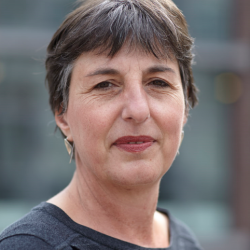 Judith Thissen (1962) is associate professor of media history in the Department of Media and Culture. Her research interests reach across fields into cinema history, social history, urban studies and Jewish studies. She teaches in the Bachelor Media and Culture and the Master program Film and Television Studies.

Thissen is a specialist of American leisure culture in the early twentieth century. Her research in this field deals in particular with the social and cultural dynamics of Jewish immigrant entertainment in New York City. Her current project investigates the marketing and reception of The Jazz Singer (Warner Bros., 1927) in the context of changing media practices among second generation Jews during the Roaring Twenties.

Over the last few years, the main focus of her work has shifted from the big city to the countryside and from American to European cinema history. Thissen recently co-edited with Clemens Zimmermann (Universität des Saarlandes) the first anthology on small-town and rural film culture in Europe, which will be published by the British Film Institute in 2016. Her own research in this field focusses on film culture in the Dutch countryside as well as on postcard representations of small-town and rural movie theaters.

Thissen has a strong interest in comparative history, interdisciplinary collaborations, and the use of Digital Humanities techniques for understanding film and theatre history. She is an active member of the Digital Cinema Studies network (DICIS), the Digital Yiddish Theater project and HoMER, an international research network of scholars whose work deals with the History of Moviegoing, Exhibition and Reception.

Henry James: The Yiddish Stage in The American Scene

You didn’t need to be the Great Gatsby to have a good time in the Roaring Twenties.

Curtain Falls on the Sunshine Theatre

One of the last remnants of the Second Avenue Yiddish Theatre District will be demolished to give way for a “boutique” office building.

Something Special for the High Holidays

Kol Nidre on Broadway, a cantor with a voice that sounds like fifty canaries, and other High Holiday gigs in turn-of-the-century New York City.

Who in Surabaya would possibly be interested in reading about Yiddish theatre in London’s East End?

The opening of the Grand Theatre brought together, gallery gods, an up-and-coming shund writer, and Jacob Adler.

It was in 1910 that the Yidishes tageblatt (Jewish Daily News) observed, with some dismay, “Where other nationalities spend the bulk of their money at weddings, funerals and processions, the Jew has h

Should a Married Woman Visit a Yiddish Music Hall?

“What a strange question,” you might think. Why would it be a problem if someone went to a music hall simply to have some fun? In the early 1900s, the answer was complicated.