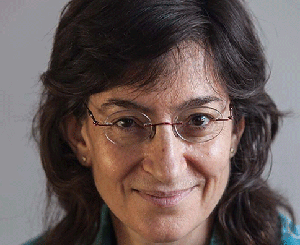 Alisa Solomon teaches at Columbia University’s Graduate School of Journalism, where she directs the Arts & Culture concentration in the MA program. A theatre critic and general reporter for the Village Voice from 1983 to 2004, she has also contributed to The New York Times, The Nation, NewYorker.com, Tablet, The Forward, Howlround.com, killingthebuddha.com, American Theater, TDR – The Drama Review, and other publications. Her first book, Re-Dressing the Canon: Essays on Theater and Gender, won the George Jean Nathan Award for Dramatic Criticism.

Her most recent book, Wonder of Wonders: A Cultural History of Fiddler on the Roof, draws on her expertise in Theatre Studies as well as on her study of Yiddish language and literature, long-standing interest in the relationship between artworks and their social contexts, and unbridled love of great musicals. And of course she sang along with the Fiddler LP as a kid, worked on a production at JCC camp, and, in more recent years, has seen performances of the show on three continents. That connection, combined with with extensive research in English and Yiddish archives in Poland, Israel, and across the US, and with interviews with more than 100 people involved in dramatizations of Sholem-Aleichem’s masterful Tevye stories, made working on Wonder of Wonders a thrilling process of both personal and scholarly discovery.

A fidler afn dakh: Fiddler on the Roof in Yiddish