The semi-circular backdrop of the stage has a world map painted on it, giving the effect of the inside of a globe. Street noises are heard, including a boy selling newspapers. Following the whistle of a locomotive, the character of Steam enters and closing the door, silencing the noise. Steam is a large man dressed in black and covered with soot. He pants as he greets the audience. Electricity dances in to the music of “Passepied” by Delibes, dressed in a glittering costume with electric wires and flashing lightning. She and Steam argue about their powers, then Steam describes the party he is holding for his jubilee. The first guest is the Slave, whom Steam brought out of a history book for the occasion. The Slave is frightened and bows to everyone. Electricity offers to dance for the party. Steam tells the Slave that they can wear opera glasses to watch her. He tells the Slave that an opera is like a temple but without gods, since everyone now is either Christian or Jewish. The Slave recalls that the Jews offered him his freedom, but then drilled a hole in his ear when he refused. He claims the right to be silent due to his bad memories. Steam and Electricity inform him that modern workers protest their suffering, and are sometimes shot for it. If these workers prefer to escape the monotony of work, they go to the cinema. Electricity says that Slave should want freedom, as all modern workers do. She says that she and Steam can easily do all the work now, leaving the freed slaves—humans—to think of more work for them to do. She also explains that there are no more masters—everyone is equal. Madame Cinema knocks, tells the others to turn off the lights, and then enters. Steam inquires about her new voice and face coloring, and then a movie is displayed on her costume, an outspread sheet. The Slave compares the movie to ancient magic, but Steam and Electricity tell him that there is no more magic, except for religion. Madame Cinema leaves and the Slave offers to fan Electricity with his bare hands, since there are no palm leaves. Steam and the Slave bring in a sofa for Electricity to lie on while he fans her. They discuss the boredom of ancient queens, which led them to commit murder, whereas modern movie queens pose for photographers. Airplane and Radio enter. Radio is a little girl who informs Steam that she will play the chirp of a distant bird for his jubilee program. The Slave again expresses admiration for modern mankind, but Steam and Electricity remind him that they are not themselves humans, just tools for humans. They say that modern humans have no time to be happy because they’re too busy thinking up more work for their powerful new tools, or just fighting. The Slave decides he wants to return to his ancient era, but Steam insists that he has to attend the jubilee banquet and program. Electricity tells the Slave to dance, since slaves did all the dancing in his era. The other characters sit on the sofa and watch the Slave do a dance of work to the music of “Orientale” by Cui. He faints, and they move him to the sofa where he watches with the others as Electricity dances to “Flight of the Bumblebee” by Rimsky-Korsakov. They all join in with her ecstatic dance. After it ends, they remain in joyful poses, then become inert. The music plays again as the curtain falls. 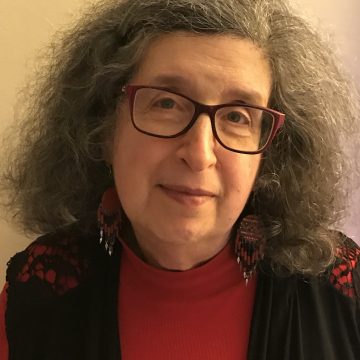 Beth Dwoskin is a retired librarian, a writer, and a singer of Yiddish songs who lives in Ann Arbor, Michigan.
More by Beth

Birthday party in honor of Steam